In the previous article, we looked at different methods to generate a private key. Whatever method you choose, you’ll end up with 32 bytes of data. Here’s the one that we got at the end of that article:

We’ll use this private key throughout the article to derive both a public key and the address for the Bitcoin wallet.

What we want to do is to apply a series of conversions to the private key to get a public key and then a wallet address. Most of these conversions are called hash functions. These hash functions are one-way conversions that can’t be reversed. We won’t go to the mechanics of the functions themselves — there are plenty of great articles that cover that. Instead, we will look at how using these functions in the correct order can lead you to the Bitcoin wallet address that you can use.

The first thing we need to do is to apply the ECDSA or Elliptic Curve Digital Signature Algorithm to our private key. An elliptic curve is a curve defined by the equation y² = x³ + ax + b with a chosen a and b. There is a whole family of such curves that are widely known and used. Bitcoin uses the secp256k1 curve. If you want to learn more about Elliptic Curve Cryptography, I’ll refer you to this article.

By applying the ECDSA to the private key, we get a 64-byte integer. This consists of two 32-byte integers that represent the X and Y of the point on the elliptic curve, concatenated together.

Note: as you can see from the code, before I used a method from the ecdsa module, I decoded the private key using codecs. This is relevant more to the Python and less to the algorithm itself, but I will explain what are we doing here to remove possible confusion. 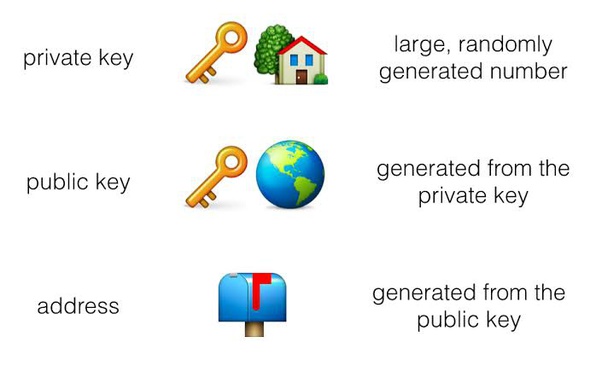 In Python, there are at least two classes that can keep the private and public keys: “str” and “bytes”. The first is a string and the second is a byte array. Cryptographic methods in Python work with a “bytes” class, taking it as input and returning it as the result.

Now, there’s a little catch: a string, say, 4f3c does not equal the byte array 4f3c, it equals the byte array with two elements, O&lt;. And that’s what codecs.decode method does: it converts a string into a byte array. That will be the same for all cryptographic manipulations that we’ll do in this article.

But we can do better. As you might remember, the public key is some point (X, Y) on the curve. We know the curve, and for each X there are only two Ys that define the point which lies on that curve. So why keep Y? Instead, let’s keep X and the sign of Y. Later, we can derive Y from that if needed.

Previously, wallet software used long, full versions of public keys, but now most of it has switched to compressed keys.

From now on, we need to make a wallet address. Whatever method of getting the public key you choose, it goes through the same procedure. Obviously, the addresses will differ. In this article, we will go with the compressed version.

What we need to do here is to apply SHA-256 to the public key, and then apply RIPEMD-160 to the result. The order is important.

Here’s how we encrypt the public key in Python:

The Bitcoin has two networks, main and test. The main network is the network that all people use to transfer the coins. The test network was created — you guessed it — to test new features and software.

Now we need to calculate the checksum of our mainnet key. The idea of checksum is to make sure that the data (in our case, the key) wasn’t corrupted during transmission. The wallet software should look at the checksum and mark the address as invalid if the checksum mismatches.

The code to calculate an address checksum is the following:

That’s it! That’s the wallet address for the private key at the start of the article.

But you may notice that something is off. You’ve probably seen a handful of Bitcoin addresses and they didn’t look like that. Well, the reason is that they are encoded with Base58. It’s a little bit odd.

Here’s the algorithm to convert a hex address to the Base58 address:

What we get is 17JsmEygbbEUEpvt4PFtYaTeSqfb9ki1F1, a compressed Bitcoin wallet address.

The wallet key generation process can be split into four steps:

Depending on the form of public key (full or compressed), we get different addresses, but both are perfectly valid.

Here’s the full algorithm for the uncompressed public key:

If you want to play with the code, I published it to the Github repository.

I am making a course on cryptocurrencies here on freeCodeCamp News. The first part is a detailed description of the blockchain.