Generating a keyring file with a self-signed or third-party certificate. To set up SSL on your server, you need a key ring containing a server certificate from an Internet certificate authority. SSL port configuration. The SSL protocol always provides an encrypted, integrity-checked, communications channel and authenticated server identity.

The following is an extremely simplified view of how SSL is implemented and what part the certificate plays in the entire process.

Normal web traffic is sent unencrypted over the Internet. That is, anyone with access to the right tools can snoop all of that traffic. Obviously, this can lead to problems, especially where security and privacy is necessary, such as in credit card data and bank transactions. The Secure Socket Layer is used to encrypt the data stream between the web server and the web client (the browser).

If SSL utilizes public key cryptography to encrypt the data stream traveling over the Internet, why is a certificate necessary? The technical answer to that question is that a certificate is not really necessary - the data is secure and cannot easily be decrypted by a third party. However, certificates do serve a crucial role in the communication process. The certificate, signed by a trusted Certificate Authority (CA), ensures that the certificate holder is really who he claims to be. Without a trusted signed certificate, your data may be encrypted, however, the party you are communicating with may not be whom you think. Without certificates, impersonation attacks would be much more common. 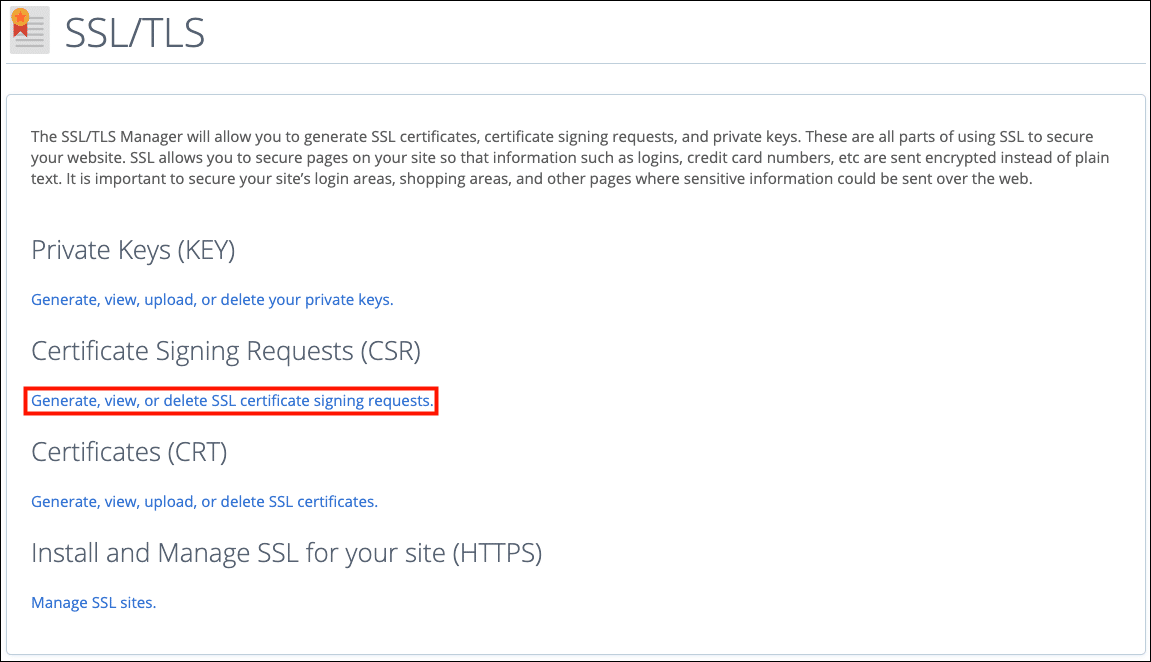 The openssl toolkit is used to generate an RSA Private Key and CSR (Certificate Signing Request). It can also be used to generate self-signed certificates which can be used for testing purposes or internal usage.

The first step is to create your RSA Private Key. This key is a 1024 bit RSA key which is encrypted using Triple-DES and stored in a PEM format so that it is readable as ASCII text.

Once the private key is generated a Certificate Signing Request can be generated. The CSR is then used in one of two ways. Ideally, the CSR will be sent to a Certificate Authority, such as Thawte or Verisign who will verify the identity of the requestor and issue a signed certificate. The second option is to self-sign the CSR, which will be demonstrated in the next section.

During the generation of the CSR, you will be prompted for several pieces of information. These are the X.509 attributes of the certificate. One of the prompts will be for 'Common Name (e.g., YOUR name)'. It is important that this field be filled in with the fully qualified domain name of the server to be protected by SSL. If the website to be protected will be https://public.example.com, then enter public.example.com at this prompt. The command to generate the CSR is as follows:

One unfortunate side-effect of the pass-phrased private key is that Apache will ask for the pass-phrase each time the web server is started. Obviously this is not necessarily convenient as someone will not always be around to type in the pass-phrase, such as after a reboot or crash. mod_ssl includes the ability to use an external program in place of the built-in pass-phrase dialog, however, this is not necessarily the most secure option either. It is possible to remove the Triple-DES encryption from the key, thereby no longer needing to type in a pass-phrase. If the private key is no longer encrypted, it is critical that this file only be readable by the root user! If your system is ever compromised and a third party obtains your unencrypted private key, the corresponding certificate will need to be revoked. With that being said, use the following command to remove the pass-phrase from the key:

The newly created server.key file has no more passphrase in it.

To generate a temporary certificate which is good for 365 days, issue the following command:

When Apache with mod_ssl is installed, it creates several directories in the Apache config directory. The location of this directory will differ depending on how Apache was compiled.