That is, unless you've played the Japanese version of the latest Monster Hunter game to death like I did and now need to blaze through your village/caravan and gathering hall quests to reach the endgame quickly in Monster Hunter 4 Ultimate. Maybe it's your first crack at the latest game in the series but you still want to progress in a jiffy.

If you're in a rush to get to 10-star village/caravan quests or those tougher Gathering Hall missions to be able to craft better gear, here's a list of key quests to speed up your progress.

MORE GAMES AND GADGETS: Catch up on the latest technology features and reviews at the Technobubble hub

These refer to the campaign mode of the game, which progresses the story. Monsters are not quite as tough as they are in online/multiplayer mode but you have to solo them.

— Pretty basic stuff. Just talk to your caravan leader, the hat maniac to unlock. No, your goofy little hat ain't worth risking my life by jumping onto a Dah'ren Mohran. But, hey, I'll do it anyway. 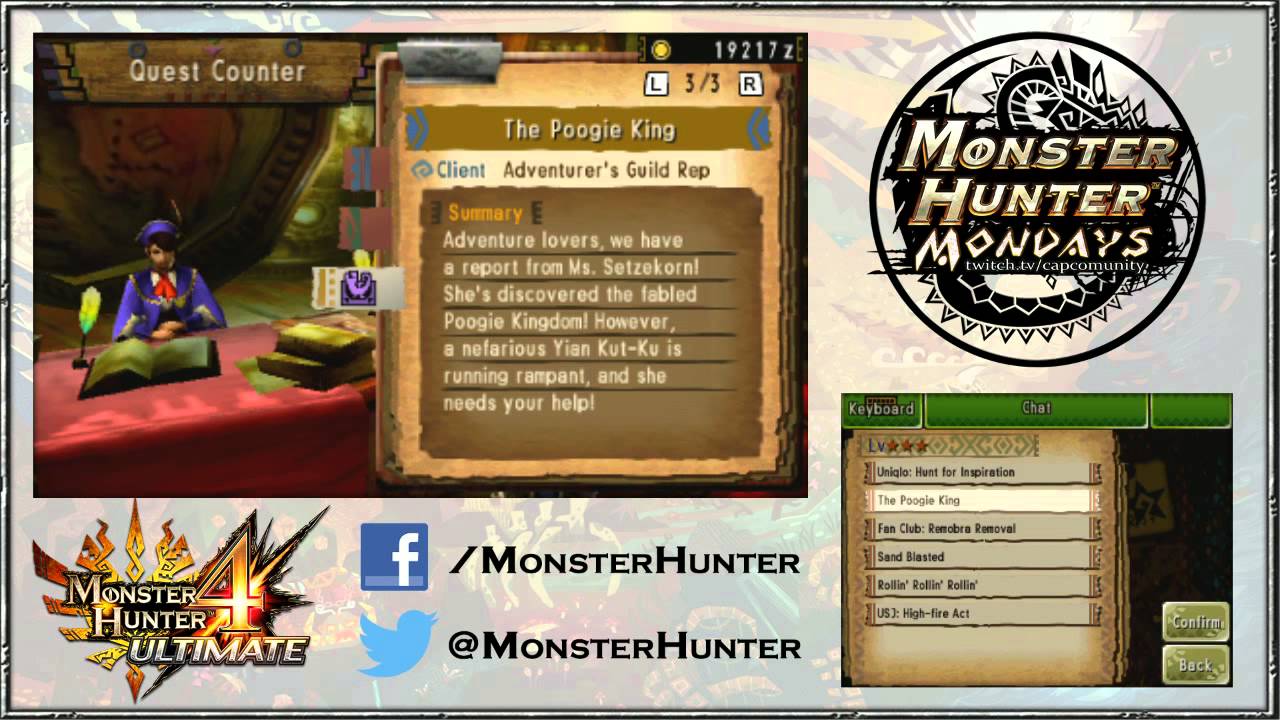 — These quests are unlocked once you finish 'A Winning Combination.'

Chip Off the Old Blockade

— Unlocked by finishing any of the quests mentioned above.

— Unlocked by finishing 'Chip Off the Old Blockade.' Finishing this mission upgrades your grain/bread and vegetable ingredients at the canteen. For the full scoop, check out my MH4U Canteen Food Ingredients Upgrade Guide. It also unlocks expeditions, which lets you do free hunts in the Everwood. To progress further, you'll need to do two expeditions: Kill Velocidrome and Kill Yian Kut Ku. These unlock:

— Finish this 3-star quest and you unlock the 3-star caravan/village quests.

— Unlocked after finishing 'Swing Into Action.'

— Unlocked after finishing 'Shipshape Skin.' Finish this to trigger:

Before going further, I also noticed one more urgent pop up while I was doing 3-star quests. I believe this appeared after I finished 'Kecha Wacha Wallop,' which is not considered a key quest.

— Makes Basarios show up in the Everwood.

— Maybe I was just sleep-deprived, but I could've sworn this was called 'Wild Palico Panic' when I first tried it. Anyway, now it says 'Pink Stink' in my mission board so 'Pink Stink' it is.

— I could've sworn this one was named 'Meownster Hunt Havoc' the first time I did it, too. Seriously, I think I'm losing my mind. Maybe I already did.

Sub: Wound the Najarala's back

— Take down this snake in the grass and you'll get an emergency Gore Magala expedition if I remember correctly. Repel that sucker and you should unlock:

— Gore! Gore! Gore! With apologies to JR's Barbecue Sauce. Bring down the flagship monster and say hello to 5-star quests.

— I was reading a Japanese forum once and some dude didn't even mention him by name and just said 'that filthy ape.' I don't know why but that made me laugh. Yes, I'm easy to please.

Now do two of the following quests:

King of the Skies

— Tigrex, he's grrrreat. At unlocking the next quest:

— Finish Gore Magala's true form after shedding its skin and you're on the fast track to high rank questing.

— I was in a rush to go through quests so I waltzed into this quest while still using a bone weapon. Can you say Bounce City?

These missions will unlock:

Finish one of the two following missions:

— Man, this guy… A bonafide troll.

Either of the previous missions will unlock:

— One of my favorite monsters to hunt. I personally find her more challenging than Azure Rathalos. Whatever you do, stay away from her left cheek… Take her down and you get:

— Lets… volt… in! I still remember the first time my cousins saw the docking manuever while playing the Japanese version of the game. 'Wait, did they just combine? That's awesome!' Finishing this also unlocks the Wyceum research center, which will be key later when fighting frenzied and extreme monsters, especially those that make your weapons and bullets bounce.

— This unlocks a pretty cool cut scene, plus your next urgent.

Urgent: Dance of a Thousand Blades

— Say hello to the flagship monster of Monster Hunter 4G. This, by the way, provides the earliest opportunity to craft those Seregios weapons, which was quite helpful when I started doing Guild Hall quests. 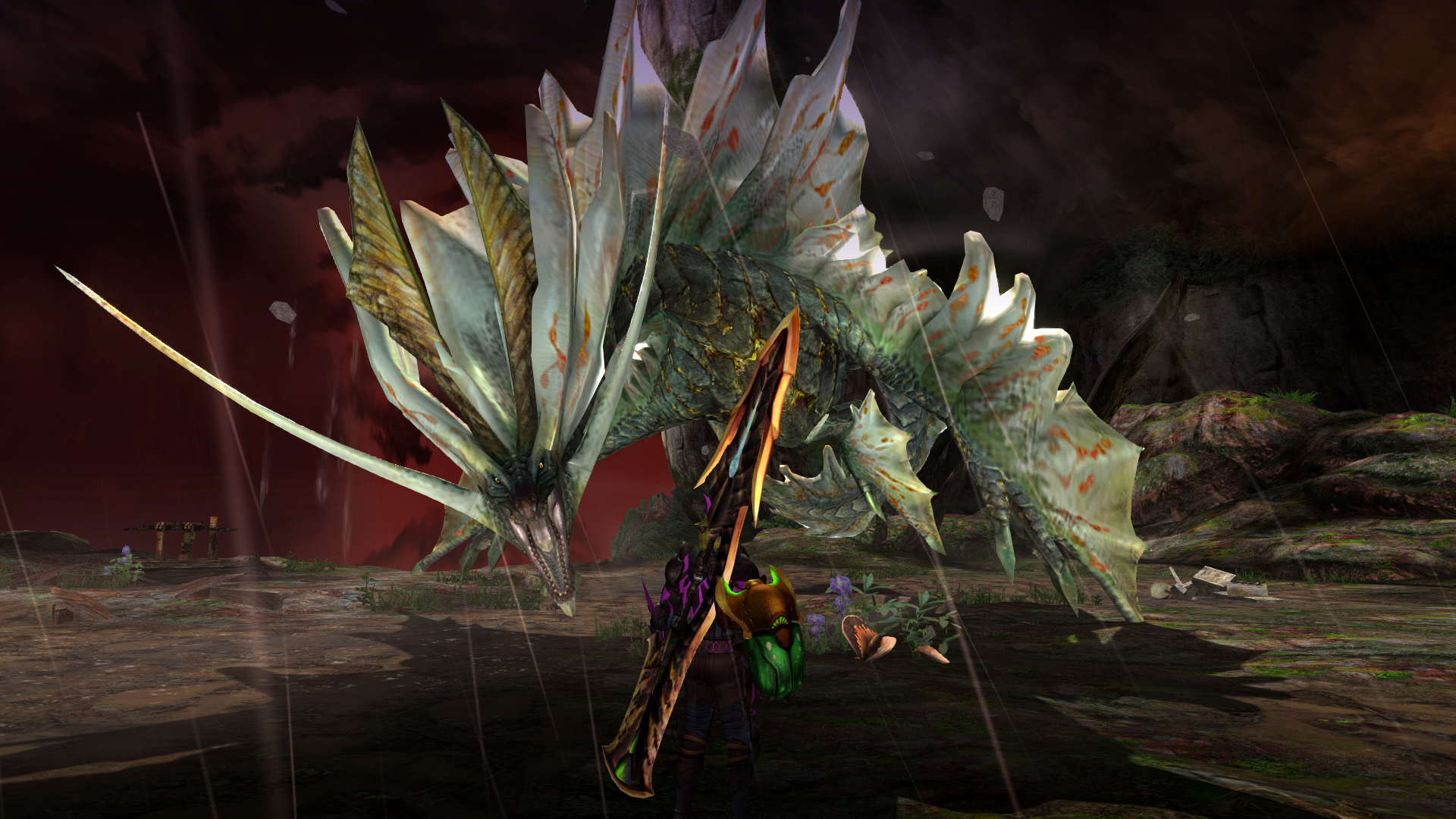 Say hello to key quests galore. Here's the order that I went through them:

An Omen in the Skies

Urgent: Death by a Thousand Cuts

— Whee, apex monsters! Don't forget to use that Wystone.

— This a siege-style battle in Dundorma with your NPC allies. Finish it and you level up your Wystone and unlock 10-star quests, which are the final batch of hunts for offline mode. Enjoy!

Say hello to the multiplayer part of MH4U. Yes, you can still solo missions if you want but keep in mind that the monsters will be tougher. For the bulk of these, I basically formed a two-man party with my cousin, which provides just the right balance difficulty-wise. Plus we only had to do the urgents twice as opposed to three or four times with a bigger team. Then again, feel free to do whatever works for you.

Sub: Wound the Najarala's back

Sub: Wound the Gravios's back

— Unlocks drinks at the canteen and High-Rank Expeditions

Hunt a Najarala and a Rathian

Bring Down the Sky King

Slay a Kushala Daora or repel it

Slay a Teostra or repel it

— Finish this and you unlock the cap on your hunter rank, which should jump up pretty high. It also unlocks:

While I've sunk in a ton of time in the Japanese version of the game, I haven't gone through all the G-rank quests in the Western version so I don't know the English names of all the stuff yet. For such quests, I will name the monsters you need to hunt as part of G-rank key quests. I'm adding subquests, too, in case there are non-key quests that feature the same monster. I will update this section as I verify information in my U.S. copy:

— Apparently, someone in Monster Hunter's localization team is an Ash Ketchum fan...

Sub: Wound the B. Tetsucabra's jaw

Line in the Sand

— These missions will unlock…

— The Diablos skull accessory always cracks me up

— This guy loves switching to Jabba the Hutt mode

Hunter in Green and Red

Hunt a Rathian and a Red Khezu

— No matter the color, Khezu remains a cave-dwelling troll.

— Bring dung bombs just in case he grabs ya'.

The Azure King and the Tyrant

Hunt an Azure Rathalos and a Tigrex

How to Zap your Zinogre

These quests will unlock:

Hunt a Brachydios and a Stygian Zinogre

Well, that's it for now. Make sure to check out the Technobubble hub for more of our guides for Monster Hunter Ultimate 4!