An SSH Key allows you to log into your server without needing a password. SSH Keys can be automatically added to servers during the installation process. Creating an SSH key on Windows. The simplest way to create SSH key on Windows is to use PuTTYgen. Download and run PuTTYgen. Click the 'Generate' button. With both Tectia SSH and OpenSSH servers, access to an account is configured by generating a public key, copying the public key to the server, and adding the public key to a /.ssh/authorizedkeys file. To extract the public key, use: puttygen -L keyfile.ppk.

PuTTYgen originates from PuTTY and is also part of the PuTTY installation package. It can be downloaded here: https://www.chiark.greenend.org.uk/~sgtatham/putty/latest.html

When you run PuTTYgen you will see a window where you have two choices: Generate, to generate a new public/private key pair, or Load to load in an existing private key.

Your key pair is now ready for use. You may also want to copy the public key to your server, either by copying it out of the Public key for pasting into authorized_keys file box, or by using the Save public key button. However, you don’t need to do this immediately; if you want, you can load the private key back into PuTTYgen later and the public key will be available for copying and pasting again.

Selecting the Type of Key

Before generating a key pair using PuTTYgen, you need to select which type of key you need. PuTTYgen currently supports these types of key:

The SSH-2 protocol supports more than one key type. The types supported by WinSCP are RSA, DSA, ECDSA, and Ed25519. 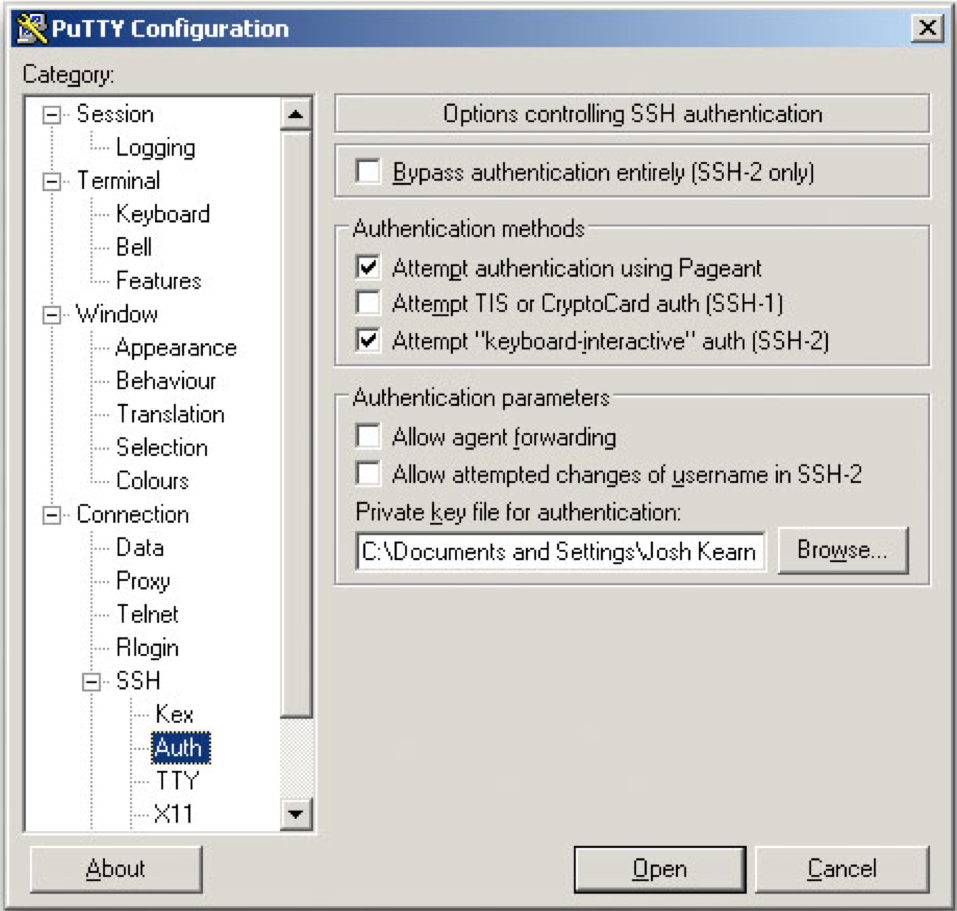 Selecting the Size (Strength) of the Key

The Number of bits input box allows you to choose the strength of the key PuTTYgen will generate.

For RSA, 2048 bits should currently be sufficient for most purposes.

For ECDSA, only 256, 384, and 521 bits are supported. (ECDSA offers equivalent security to RSA with smaller key sizes.)

Once you have chosen the type of key you want, and the strength of the key, press the Generate button and PuTTYgen will begin the process of actually generating the key.

When the progress bar reaches the end, PuTTYgen will begin creating the key. The progress bar will reset to the start, and gradually move up again to track the progress of the key generation. It will not move evenly, and may occasionally slow down to a stop; this is unfortunately unavoidable, because key generation is a random process and it is impossible to reliably predict how long it will take.

When the key generation is complete, a new set of controls will appear in the window to indicate this.

The Key fingerprint box shows you a fingerprint value for the generated key. This is derived cryptographically from the public key value, so it doesn’t need to be kept secret; it is supposed to be more manageable for human beings than the public key itself.

The fingerprint value is intended to be cryptographically secure, in the sense that it is computationally infeasible for someone to invent a second key with the same fingerprint, or to find a key with a particular fingerprint.

Setting a Passphrase for Your Key

The Key passphrase and Confirm passphrase boxes allow you to choose a passphrase for your key. The passphrase will be used to encrypt the key on disk, so you will not be able to use the key without first entering the passphrase.

When you save the key, PuTTYgen will check that the Key passphrase and Confirm passphrase boxes both contain exactly the same passphrase, and will refuse to save the key otherwise.

If you leave the passphrase fields blank, the key will be saved unencrypted. You should not do this without good reason; if you do, your private key file on disk will be all an attacker needs to gain access to any machine configured to accept that key. If you want to be able to passwordless log in without having to type a passphrase every time, you should consider using Pageant so that your decrypted key is only held in memory rather than on disk.

Under special circumstances you may genuinely need to use a key with no passphrase; for example, if you need to run an automated batch script that needs to make an SSH connection, you can’t be there to type the passphrase. In this case we recommend you generate a special key for each specific batch script (or whatever) that needs one, and on the server side you should arrange that each key is restricted so that it can only be used for that specific purpose. The documentation for your SSH server should explain how to do this (it will probably vary between servers).

Choosing a good passphrase is difficult. Just as you shouldn’t use a dictionary word as a password because it’s easy for an attacker to run through a whole dictionary, you should not use a song lyric, quotation or other well-known sentence as a passphrase. If you want your passphrase to make grammatical sense, this cuts down the possibilities a lot and you should use a longer one as a result.

Do not forget your passphrase. There is no way to recover it.

Saving Your Private Key to a Disk File

Once you have generated a key, set a comment field and set a passphrase, you are ready to save your private key to disk.

Press the Save private key button. PuTTYgen will put up a dialog box asking you where to save the file. Select a directory, type in a file name, and press Save.

Saving Your Public Key to a Disk File

RFC 4716 specifies a standard format for storing SSH-2 public keys on disk. Some SSH servers (such as ssh.com’s) require a public key in this format in order to accept authentication with the corresponding private key. (Others, such as OpenSSH, use a different format)

To save your public key in the SSH-2 standard format, press the Save public key button in PuTTYgen. PuTTYgen will put up a dialog box asking you where to save the file. Select a directory, type in a file name, and press Save.

You will then probably want to copy the public key file to your SSH server machine.

If you use this option with an SSH-1 key, the file PuTTYgen saves will contain exactly the same text that appears in the Public key for pasting box. This is the only existing standard for SSH-1 public keys.

The text is copy of PuTTY User Manual or was inspired by it.

PuTTYgen is a key generator tool for creating pairs of public and private SSH keys. It is one of the components of the open-source networking client PuTTY. Although originally written for Microsoft Windows operating system, it is now officially available for multiple operating systems including macOS, Linux. PuTTYgen.exe is the graphical tool on Windows OS. While on the other side, Linux OS has the only command-line version could be accessible using SSH commands.

Although PuTTYgen collects keys in its native file format i.e. .ppk files, the keys can easily be converted to any file format. For Windows, the software interface is PuTTYgen.exe, whereas, for Linux OS the command-line adaptation is available using SSH commands.

How to use PuTTYgen?

PuTTYgen is used to generate public or private key pair for creating SSH keys. Below is the complete guidance about how to generate RSA key in the Windows operating system:

RSA key pair generated through PuTTYgen is used in two various ways defined as below:

PuTTYgen being a component of the terminal emulator PuTTY does not have to be downloaded separately, hence, comes with the PuTTY .msi installation package. You can follow the simple steps to download PuTTYgen software for your system. That is the reason why you don’t need to download PuTTYgen separately. Once you download PuTTY software, you will be able to install and run PuTTYgen easily in no time. Below is the complete instruction about how to download and install PuTTY on Windows.

Apart from that, it is also integrated into third-party programs such as WinSCP installation package. Below you can find a complete PuTTYgen download and installation guide for all operating systems.

To download PuTTYgen the primary requisite is to acquire the copy of PuTTY installation package. For the 64-bit operating system, one must install the 64-bit version of PuTTY, i.e. putty-64bit-<version>-installer.msi.Similarly, for the 32-bit operating system, the respective 32-bit version of PuTTY, i.e. putty-<version>-installer.msi needs to be installed.

To get PuTTY, go to PuTTY Installation Download page, whereby the complete installation package will be available with setup instructions, installation guide, and download links to all other components of PuTTY such as putty.exe, pscp.exe, psftp.exe, puttytel.exe, plink.exe, pageant.exe and putty.zip.

After successfully downloading and installing PuTTY on your Windows machine, you are just 2-3 clicks away to run PuTTYgen. Follow the below-given step by step guidance to run PuTTYgen:

To run PuTTYgen, Go to Windows -> Start Menu -> All Programs -> PuTTY -> PuTTYgen. You will see a window for the PuTTY Key Generator on your screen.

Below is the detailed guide to download PuTTYgen on Mac operating system. Mac OS has a built-in command-line SSH client known as Terminal. To utilize it, go to Finder and then opt for Go -> utilities from the top menu. After that find the terminal which supports SSH connections to remote servers.

However, to run PuTTYgen for mac, the first one must have to install PuTTY. There are multiple ways to install PuTTY, which are Homebrew or MacPorts. Both alternatives will also install the command-line of adaptations of PuTTYgen.

Mac has the port of PuTTY which can be installed in various ways described as below:

However, there is an alternative way to install PuTTY on Mac OS. Cyberduck is a widely used Mac OS SSH Client. Once PuTTY installed on the Mac OS, a user can convert PuTTY derived private key format to OpenSSH.

To convert the private key to standard PEM format, type the following command –

You can also read the guide to convert .pem file to .ppk using puttygen.

To download PuTTYgen for Ubuntu (Linux) operating system, a user to first install PuTTY. However, in some Linux distributions, the SSH key generation tool – PuTTYgen needs to be installed independently from the PuTTY client.

To create the key pair for authentication in Linux use the below command:-

Below are few important command line options in the Linux operating system for PuTTY:

Thus, above are the prominent commands of PuTTYgen in Linux operating system. Besides that, there are many other commands available to perform various tasks from the command prompt in Linux at flank speed.

Types of Keys Supported on PuTTYgen

It is important to know the types of key PuTTYgen supports prior to using it. Below are the key types that it currently supports for SSH-2 and SSH-1 protocol:-

The above description is a detailed brief on downloading and running PuTTYgen on all major operating systems. For further details please check the Download PuTTY page.